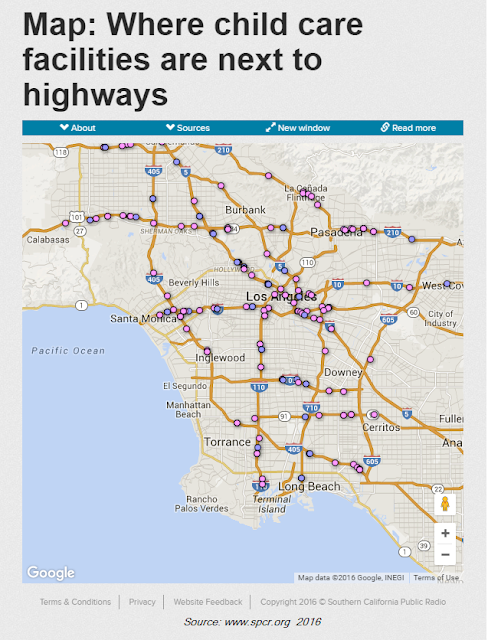 Local KPCC reporter, Deepa Fernandez (Early Childhood Development Correspondent) approached SCEHSC staff and researchers last year to inquire about air pollution monitoring and health effects of near roadway air pollution on children. Today her feature story about childcare centers in Los Angeles in close proximity to freeways was published.We are proud to not only have our center members quoted in the story, but community partners as well.

Culver City writer Tracey Moore loved everything about her daughter’s daycare. It was close to her family’s house, included some Spanish immersion, and her young child was smitten with the staff.

So when the owner informed parents she was moving, there was unanimous consensus among families that they would all follow her.

But when Moore saw the new daycare location, she was devastated: “It’s a side street that dead ends right at the freeway,” she recalled, “and the preschool is about a stone’s throw [away].”

Every day, more than 300,000 cars and trucks rumble through that section of the 405, according to CalTrans data for 2014 – making it one of the most highly-trafficked spots in Los Angeles. Moore didn’t know that specific statistic, but she could see the traffic and was concerned about what she called the “invisible ribbon of particles” drifting off the freeway from cars and trucks directly into the yard of the day care. Read more here

Map: Where child care facilities are next to highways