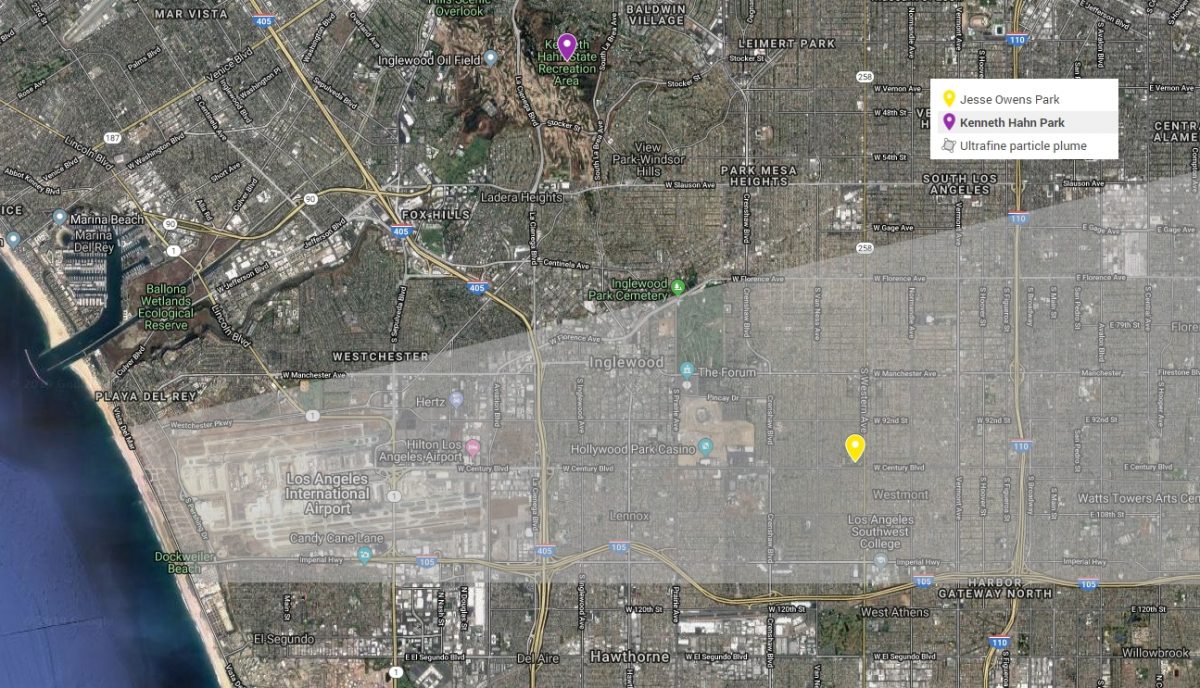 The map above shows the two parks where the study took place. The grey shaded area shows the approximate location of the plume of ultrafine particles created by air traffic around LAX, that usually occurs when the winds are blowing steadily from the West.

A recent research study by Dr. Rima Habre took a detailed look at the short-term health impacts caused by breathing in ultrafine particulate (UFP) matter that is emitted from aircraft activity at the Los Angeles International Airport (LAX). Several years ago, USC researchers identified a clear pattern of UFP emissions from takeoff and landing aircraft activities at LAX. Levels of the dangerous UFPs were found to be 4 to 5 times greater than background levels in downwind communities.  “Ultrafine particulate matter is known to contribute to reduced lung function, and airway inflammation in individuals with asthma. We wanted to take a close look at short term effects on health when individuals breathe air that contains UFPs from airplanes,” said Habre. The study participants were made up of adults with doctor diagnosed asthma.

Dr. Rima Habre has been with USC for five years. Dr. Habre’s expertise lies in air pollution exposure assessment, analyzing patterns of how people get exposed to air pollution across time and space and studying how specific pollutants impact their health.

Recently Dr. Habre’s work reached the international stage through a documentary, produced by the Canadian Broadcasting Company, called Something in the Air.  “The producers were very interested in learning more about our latest work around air pollution and asthma – specifically around the latest technologies we are using to better understand the impacts of small particles on a personal level – in children and adults with asthma, and in pregnant women.” Dr. Habre was interviewed about her work around ultrafine particle exposures downwind of major airports and its effects on asthma, as well as her work to understand how children’s personal exposure to air pollution predict their risk of experiencing an asthma attack. Something in the Air will be released this week in Canada, with an international release to be announced.

Habre and her team designed this study to test the short-term effects of breathing ultrafine particles by asking study participants to walk in a Los Angeles park located within the known higher levels of UFPs emitted from airplanes and near heavily trafficked roads, and another park farther away from the airport and busy roads with lower levels of UFPs.

“In our study, we found that inhaling UFPs led to higher inflammation in the blood in adults with asthma shortly after exposure. However, different inflammation markers responded to aircraft-related versus traffic-related UFPs – both of which are major ultrafine particle sources in dense urban areas. We were able to see these different signals because we managed to overcome the challenge of separating the air pollution mixture into its major sources using sophisticated measurements and modeling techniques,” said Habre.  The pollutants measured by the study included UFP particle number, particle size, black carbon, carbon dioxide, particle-bound polyaromatic hydrocarbons, and ozone.

The significance of Habre’s study is that in such a short time, following regular walking exposure and a higher exposure, they were able to see significant elevation in inflammation systemically, not just in the lungs but in the overall blood circulation. Inflammation is tied to a lot of disease processes; cardiovascular, respiratory, and metabolic. “We don’t know specifically what this inflammation will lead to down the line, but we know that inflammation is generally a bad thing, and will complicate or exacerbate existing conditions. Ideally, we would have liked to have been able to monitor people long-term to see if that inflammation persists or if it goes down after a while but we were not able to do that in this specific study, that’s a future direction of this research I’d like to look at,” said Habre.

When asked what this research means to the overall population, Habre described the current body of research that has found ultrafine particles to be much more toxic than the larger sizes of particulate matter, UFPs are not regulated, and UFPs impact large numbers of people who live in communities surrounding airports.

Dr. Habre also leads environmental exposure assessment efforts in multiple research studies being conducted at USC, including the MADRES study of pregnant women and babies and the LA DREAMERs study of children’s health across the life course, and in partnership with other research groups such as the Los Angeles PRISMS Center, a UCLA/USC partnership.  Her work in the Los Angeles PRISMS Center is taking a deeper dive into the different sources of air pollution asthmatic children encounter in their day to day lives in Los Angeles and how it impacts their health.  This study focuses on personal experiences, using Bluetooth-enabled wearable sensors to monitor environmental exposures, location, activity, medications and symptoms, to ultimately generate new information to help predict and prevent asthma attacks. To learn more about the Los Angeles PRISMS Center, watch this video: https://www.youtube.com/watch?v=-m72NkwolgU&feature=youtu.be

As she moves forward with her research on the health effects of ultrafine particulate matter in urban areas, Dr. Habre plans to build on her current work by studying how people with asthma are affected, as well as those who are obese, have diabetes, or cardiovascular issues. “I would like to be able to capture a wider variety of sources of ultrafines in urban areas and also be able to monitor individuals for a longer period of time to really understand what happens next. In this study we saw very quick and acute effects, but do people tend to recover after a day? I think the ultimate goal would be to really understand if people living in these high exposure locations, for extended periods of time, and breathing this mixture in regularly are at a significantly higher risk or not,” she said.

For more information on the “Something in the Air” documentary that Dr. Habre’s work is featured in, on the documentary’s website: www.somethingintheair.ca. Once the documentary is released in the United States, USC Environmental Health Centers will publish the release date and viewing information. 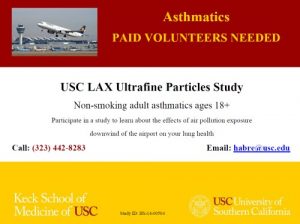 USC Researchers to do a Pilot Study on LAX Air Pollution and Asthma April 30, 2015

USC Researchers to do a New Study on LAX Air Pollution and Asthma November 4, 2014