LOS ANGELES — New research from Keck Medicine of the University of Southern California (USC) bolsters evidence that exposure to tobacco smoke and near-roadway air pollution contribute to the development of obesity.

The study, to be posted online Wednesday, Nov. 12, 2014 in Environmental Health Perspectives, (click here) shows increased weight gain during adolescence in children exposed to secondhand tobacco smoke or near-roadway air pollution, compared to children with no exposure to either of these air pollutants. The study is one of the first to look at the combined effects on body mass index of exposure to both near-roadway air pollution and tobacco smoke. The effects were substantially greater in children exposed to both air pollutant mixtures than to either alone.

“Vehicle miles traveled, exposure to some components of the near-roadway air pollutant mixture, and near roadway residential development have increased across the United States over the last several decades corresponding to the epidemic of childhood obesity,” said Rob McConnell, M.D., professor of preventive medicine, Keck School of Medicine of USC and lead author on the study. “The potential for near-roadway air pollution to be among several factors contributing to the epidemic of obesity merits further investigation.”The research builds on previous studies showing that exposure to secondhand smoke and particulate air pollution cause heart and lung disease.

Childhood obesity has doubled in children and quadrupled in adolescents in the past 30 years, according to the Centers for Disease Control and Prevention (CDC). Obese youth are more likely to suffer from health challenges, including high cholesterol, high blood pressure, diabetes, bone and joint problems, social stigmatization and self-esteem problems. Obesity for children is defined by the CDC as a BMI at or above the 95th percentile for children of the same age and sex.

The USC study examined exposure of more than 3,000 children to tobacco smoke during their mothers’ pregnancy and to secondhand smoke, as well as air pollution effects from busy roadways, and looked for associations with body mass index. The children were enrolled at age 10 in the Southern California Children’s Health Study, started in 1992 to study the long-term effects of air pollution on children. The children were followed yearly over an eight-year period through high school graduation at age 18. Most of the children were non-Hispanic white or Hispanic.

“Further research is needed to determine if our findings can be replicated in other populations,” McConnell said, “and to assess both the potential contribution of combustion sources to the epidemic of obesity and the potential impact of interventions to reduce exposure.”

ABOUT KECK MEDICINE OF USC
Keck Medicine of USC is the University of Southern California's medical enterprise, one of only two university-based medical systems in the Los Angeles area. Encompassing academic, research and clinical excellence, the medical system attracts internationally renowned experts who teach and practice at the Keck School of Medicine of USC, the region’s first medical school.

This news release was prepared by USC Health Sciences Public Relations & Marketing and the Division of Environmental Health. 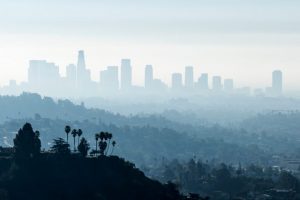