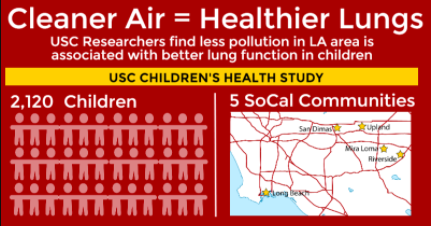 A 20-year study finds that millennial children in Southern California breathe easier than ones who came of age in the ‘90s, for a reason as clear as the air in Los Angeles today.

The University of Southern California Children’s Health Study measured lung development between the ages of 11 and 15 and found large gains for children studied from 2007 to 2011, compared to children of the same age in the same communities from 1994-98 and 1997-2001. 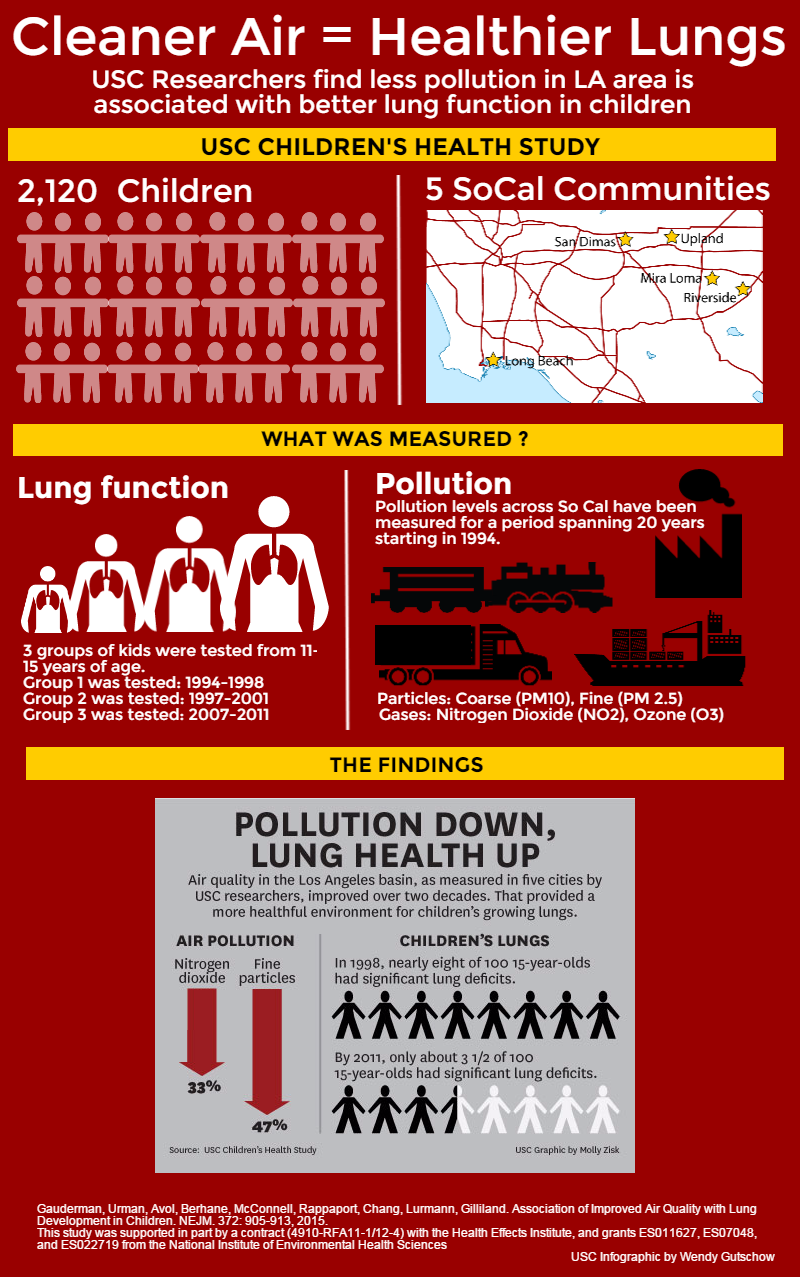 The gains in lung function paralleled improving air quality in the communities studied, and across the Los Angeles basin, as policies to fight pollution took hold.

The research appears in the March 5, 2015 issue of the New England Journal of Medicine.

Many studies have measured the health effects of pollution by comparing locations with different air quality. The challenge lies in ruling out other factors that may account for health differences between communities.

By following more than 2,000 children in the same locations over two decades and adjusting for age, gender, ethnicity, height, respiratory illness and other variations, the study provides stronger evidence that improved air quality by itself brings health benefits – benefits which last a lifetime for children breathing cleaner air during their critical growing years.

“We saw pretty substantial improvements in lung function development in our most recent cohort of children,” said lead author W. James Gauderman, professor of preventive medicine at the Keck School of Medicine of USC, noting this was the first good news from the long-running study.

“It’s strange to be reporting positive numbers instead of negative numbers after 20 years.”

Widely-covered previous findings from the study showed an increase in stunted lung development for children in areas with heavy air pollution, as well as a higher risk of asthma for children living near busy roadways.

Combined exposure to two harmful pollutants, nitrogen dioxide (NO2) and particulate matter of diameter under 2.5 microns (PM2.5), fell approximately 40 percent for the third cohort of 2007-2011 compared to the first cohort of 1994-98. The study followed children from Long Beach, Mira Loma, Riverside, San Dimas and Upland.

Children’s lungs grew faster as air quality improved. Lung growth from age 11 to 15 was more than 10 percent greater for children breathing the lower levels of NO2 from 2007 to 2011 compared to those breathing higher levels from 1994-1998.

That compares to 2.5 percent by age 18 for children from the first two cohorts who lived in cities with cleaner air, such as Lompoc and Santa Maria. Cuts in federal funding forced the researchers to exclude those cities in the last cohort and focus only on areas with heavier air pollution.

“Reduced lung function in adulthood has been strongly associated with increased risks of respiratory disease, cardiovascular disease, and premature death," said Gauderman. "Improved air quality over the past 20 years has helped reduce the gap in lung health for kids inside, versus outside, the L.A. basin."

The growing years are critical for lung development. The researchers are monitoring lung function in a group of adults who participated in the study as adolescents. So far they have not found evidence of a rebound after the teenage years.

“Their lungs may have lost the opportunity to grow any more,” Gauderman suggested. 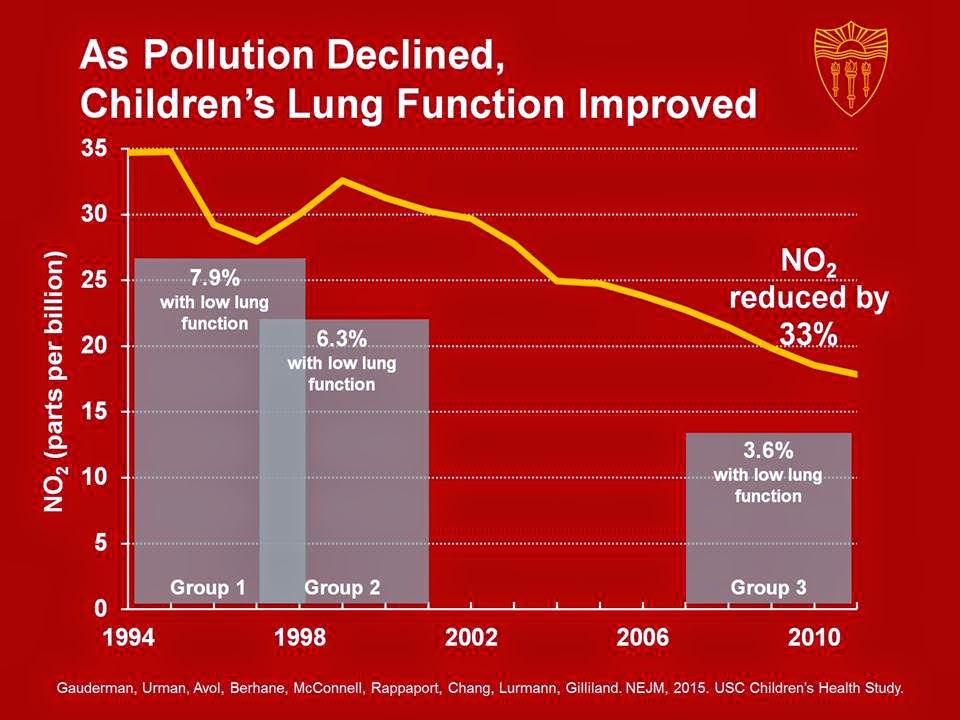 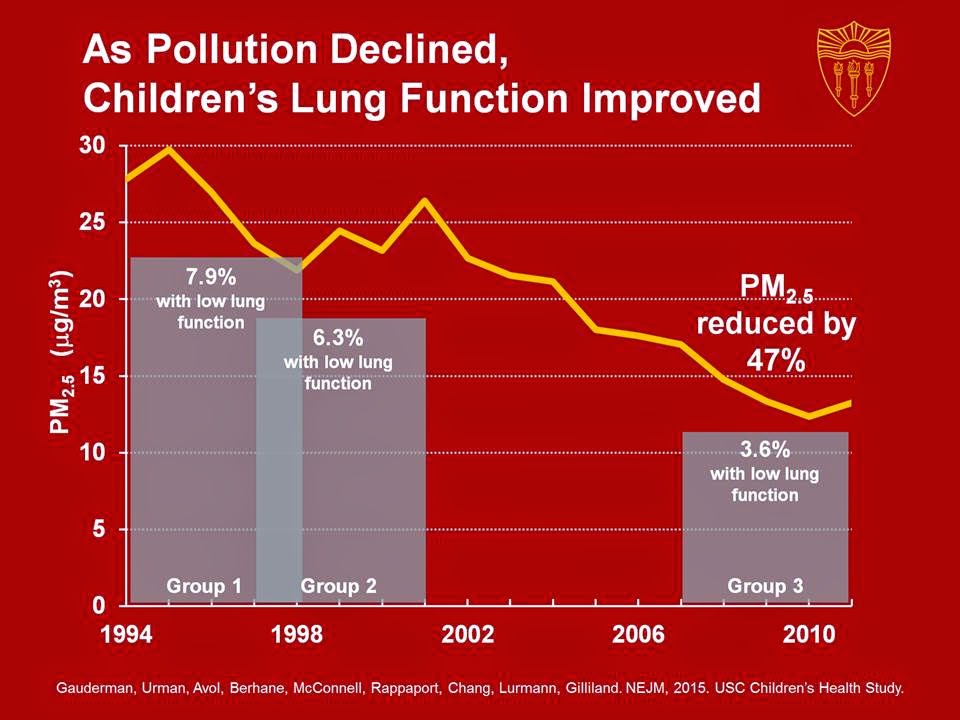 Lung development measured by the study improved across the board, regardless of education, ethnicity, tobacco exposure, pet ownership and other factors.

Across all five communities, lung development for children with asthma improved roughly twice as much as for other children. But even children without asthma showed significant improvements in their lung capacity, suggesting that all kids benefit from improved air quality.

"We expect that our results are relevant for areas outside southern California, since the pollutants we found most strongly linked to improved health -- nitrogen dioxide and particulate matter -- are elevated in any urban environment," Gauderman said.

The incidence of asthma did not change significantly over the three cohorts. Previous research by the Children’s Health Study showed that the risk of asthma increases with proximity to busy roadways.

Lung function testing took place in school at least three times for each cohort, when the children were approximately 11, 13, and 15 years old. Students were asked to blow into a spirometer, an instrument that measures lung size and strength. The spirometer reads total lung volume as well as the amount of air that a person is able to blow out in one second.

Air quality monitoring stations in the five communities took continuous readings of key pollutants over the study period, which the researchers averaged to examine the exposures for each cohort.

Local, state and federal regulations have achieved large reductions in pollutants in the Los Angeles basin.

Ozone was below the federal eight-hour standard for most of Los Angeles and the coastal basin and exceeded the standard fewer than 20 days a year in the valleys, although parts of San Bernardino and Riverside counties continued to exceed the federal standard 40 to 80 or more days per year.

“It’s an environmental success story. The air has gotten much cleaner than it was in the past. I grew up here in the ‘70s. Even from Pasadena you couldn’t see the San Gabriel Mountains on a typical summer day,” Gauderman said.

Gauderman cautioned: “We can’t get complacent, because not surprisingly the number of vehicles on our roads is continually increasing. Also, the activities at the ports of L.A. and Long Beach, which are our biggest polluting sources, are projected to increase. That means more trucks on the road, more trains carrying cargo.”

“These gains really aren’t fixed,” added senior author Frank Gilliland, Hastings Professor of preventive medicine at the Keck School. “We have to maintain the same sort of level of effort to keep the levels of air pollution down. Just because we’ve succeeded now doesn’t mean that without continued effort we’re going to succeed in the future.”

Gilliland noted that the state’s historic drought is expected to raise particulate pollution.

The study’s third cohort of 2007-11 also came of age at a fortunate time for respiratory if not financial health. The economy shrank and emissions fell during the Great Recession.

But the study also shows that air pollution and growth can coexist over the long term. The economy and population in the basin have grown since the cohort of 1994-98.

“Our results suggest that better air quality in future will lead to even better lung health,” Gauderman said.

Gauderman’s and Gilliland’s co-authors were Robert Urman, Edward Avol, Kiros Berhane, Rob McConnell, Edward Rappaport and Roger Chang, all from the Department of Preventive Medicine at the Keck School, and Fred Lurmann of Sonoma Technology, Inc.

The authors dedicated their paper to the late John Peters of the Keck School’s Department of Preventive Medicine, who conceived the Children’s Health Study and directed it over most of its 20 years.

The study was funded by the Health Effects Institute, a partnership of the auto industry and the federal government; the California Air Resources Board; the Hastings Foundation; and the National Institute of Environmental Health Sciences (grants ES011627, ES07048, and ES022719). 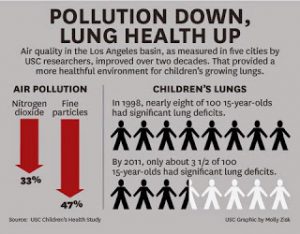