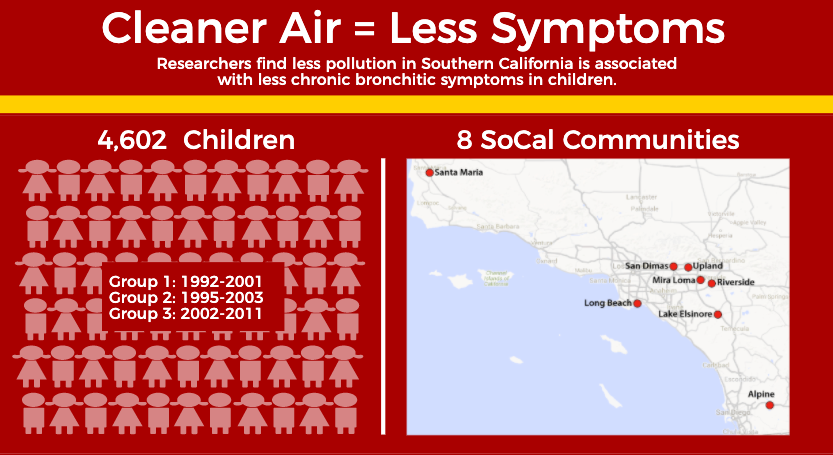 A USC study that tracked Southern California children over a 20 year period has found they now have significantly fewer respiratory symptoms as a result of improved air quality.

The finding expands on the landmark USC Children’s Health Study, which a year ago reported that kids’ lungs had grown stronger over the past 20 years as pollution levels in the Los Angeles Basin declined. In the current study, USC researchers examined a health issue that makes many parents anxious while pulling at their pocketbooks: bronchitic symptoms that could land otherwise healthy children in a doctor’s office or hospital.

The research appears in the April 12, 2016 issue of the Journal of the American Medical Association.

To assess respiratory symptoms, USC scientists studied children in eight California communities and defined bronchitic symptoms over the preceding year as a daily cough for at least three consecutive months, congestion or phlegm not related to a cold, or inflammation of the mucous membranes, according to Kiros Berhane, lead author and a professor of preventive medicine at the Keck School of Medicine of USC. 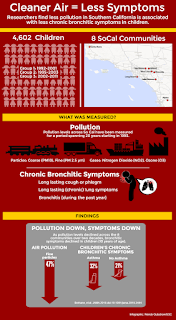 “This is one of the few times that we have been able to report good news, and this is very likely a direct result of the science-­‐‑based policies that have been put in place,” Berhane said. “The message that clean air leads to better health in children should be taken seriously because it has implications for how we live and how productive we become.”

The study, published April 12 in the Journal of the American Medical Association, followed 4,602 children in three cohorts as they aged from 5 to 18. During 1993 to 2012, children and their parents from Long Beach, San Dimas, Upland, Riverside, Mira Loma, Lake Elsinore, Alpine and Santa Maria answered questionnaires about children’s health. Air quality was continuously monitored in each community.

“Because of the wide variations in ambient pollution levels among the eight California communities we analyzed, these findings are applicable to other parts of the United States and maybe other parts of the world as well,” Berhane said, adding the results could help with asthma management and the overall respiratory health of children.

How much children’s respiratory health improved

Because bronchitic symptoms are usually about four times higher in children with asthma, the scientists examined associations of air pollution reduction with bronchitic symptoms separately for kids with and without asthma. Researchers also adjusted their analyses for age, gender, race or ethnicity, secondhand tobacco smoke and presence of cockroaches in the home.

“It is important to note that while reductions in bronchitic symptoms were larger in children with asthma, they were still substantial and significant in children without asthma as well — indicating that all children have benefited from the improvement in air quality over the past 20 years,” Berhane said.

The study found that tiny particles called particulate matter 2.5 (PM 2.5) — which can penetrate deep into lungs and cause serious health problems — dropped by 47 percent from 1992 to 2011 in the study region. USC researchers were able to associate cleaner air with improved children’s respiratory health. Kids with asthma were 32 percent less likely to suffer from bronchitic symptoms, and children without asthma experienced a 21 percent reduction in these respiratory problems.

“This type of data is important for policymaking and for how clinicians would advise their patients,” Berhane said.

The cost of asthma and sick children

About 1 in 10 children in the United States had asthma in 2009, according to the Centers for Disease Control and Prevention. Medical expenses associated with asthma amounted to $50.1 billion in 2007 and cost the nation about $3,300 per person each year.

“Changes in children’s respiratory health have a ripple effect,” Berhane said. “A child may stay home because of severe bronchitic symptoms. That could mean parents have to call in sick or arrange for a caregiver. Beyond quality of life, childhood asthma and bronchitic symptoms take a toll on children’s school attendance, parental productivity and society in general.”

Asthma is the cause for almost 2 million emergency room visits each year, according to the Asthma and Allergy Foundation of America. Each year, this respiratory condition is the reason for more than 14 million doctor visits and about 439,000 hospital stays.

Frank Gilliland, senior author and a professor of preventive medicine at Keck Medicine of USC, said the USC Children’s Health Study is a unique examination because it has been able to follow children for so many years.

“Asthma is the most common chronic disease of childhood, so the reduction of these symptoms by 16 to 32 percent is a big deal,” Gilliland said. “We studied longitudinal cohorts of children for 20 years using consistent methods and found that decreased levels of air pollutants were associated with a marked decrease in bronchitic-­‐‑related symptoms in children both with and without asthma. No other study has been able to accomplish this.”

California cities have consistently topped the American Lung Association’s annual list of most polluted cities by ozone or particulate matter pollution. Historically, Southern California has reported high levels of ambient air pollution because of emissions from vehicles, industrial sources and two of the nation’s largest ports.

“While the reduction in ambient air pollution has been observed during the past 20 years, it was most marked after 2000 and is very likely due to policies that were put in place,” Berhane said. “Even though this is very encouraging, there is still room for improvement. We must recognize that in some cases, the ozone and particulate matter levels in Southern California are still in violation of federal standards.”

Some California regulatory policies that have been implemented include the Low-Emission Vehicle Program, a risk-reduction plan for diesel fueled engines and vehicles, and pollution controls at the ports of Los Angeles and Long Beach.

For many years, environmental epidemiologists have reported adverse health effects associated with increasingly polluted air. So the ability to report that Southern California has been on the path to cleaner air and that this reduction in air pollution has led to significant improvement in children’s health is a welcome change, Gilliland said.

Berhane added: “But we must not get complacent. We expect more cars on the road, more ships at our ports and more economic activities in the region. Even if we maintain the current policies and practices in environmental protection, pollution levels could start to rise again because of more cars and economic activities. We have to stay vigilant so that we do not lose current gains in air quality and the associated improvements in our children’s health.”

USC strives to conduct research that could have a global impact. This study was supported by the National Institute of Environmental Health Sciences, the Health Effects Institute and the California Air Resources Board. 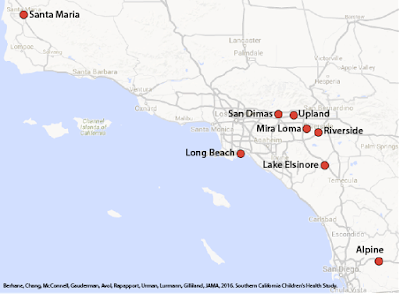 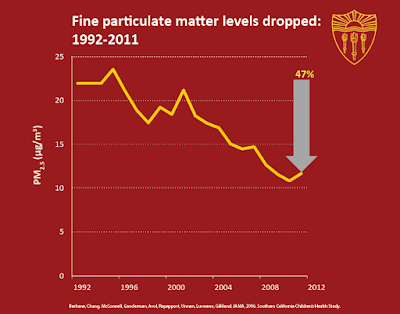 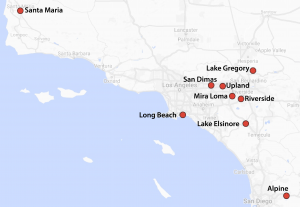 NEW RESEARCH: Estimating asthma incidence if air pollution levels had remained high and if the levels were lowered July 24, 2019