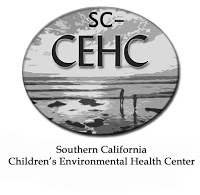 The Outreach team will be publicizing the event and have a booth with resources at the event.

"The air out there: Traffic, pollution and children’s health"

From the KPCC event page:

Few would dispute that the air quality in Los Angeles is significantly better than decades past. But for those who live or work beside some of L.A.’s highly trafficked roadways, air pollution is still a major concern. While it’s hard to get away from traffic pollution in Los Angeles, some areas are worse than others, like along the 710 freeway and East LA. Health effects associated with air pollution can range from mild to severe asthma to brain damage.

Since there are many schools in Los Angeles near highly trafficked roadways, children are one particular group at risk of the effects of air pollution. Do you worry that your child might attend a daycare or preschool too close to a major freeway or roadway? Are you concerned about how the air pollution is affecting your health? Is the air quality getting better or worse in your community? What do you think could help improve air quality?

James Gauderman, professor in the Department of Preventive Medicine at the University of Southern California, Los Angeles

Elisa Nicholas, founder and project director of the Long Beach Alliance for Children with Asthma and pediatrician

Additional panelists to be announced.

We would like to thank our engagement partner, Southern California Children’s Environmental Health Center based at USC. 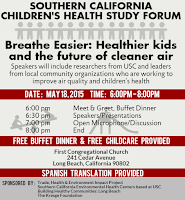