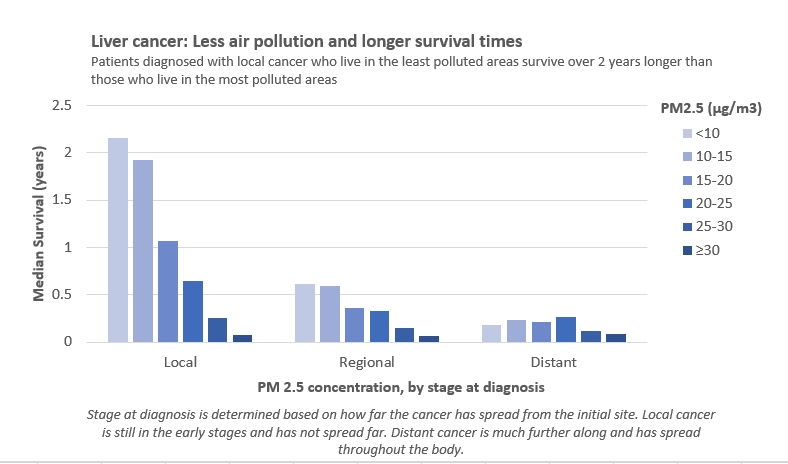 New research from the University of Southern California shows higher air pollution exposures are associated with shorter survival times for people diagnosed with liver cancer. Air pollution has already been linked to shortened lung cancer survival, and this study adds to the growing body of evidence indicating that air pollution can affect other cancers too.

The study, published in the International Journal of Cancer, looked at over 20,000 California patients diagnosed with hepatocellular carcinoma, the most common form of liver cancer. “We were interested in the liver since it is the primary organ responsible for detoxification in the body and it could be impacted by exposure to environmental toxins,” said Sandrah Eckel, PhD, assistant professor of Preventive Medicine at the Keck School of Medicine and one of the lead researchers. Since the liver helps filter out toxins from our environment, it may be particularly vulnerable to air pollution.

The researchers focused on tiny particles in the air called particulate matter, the smallest of which measure less than 2.5 microns in diameter (PM2.5). These particles are so small they can travel deep into the lungs and even enter the bloodstream. PM2.5 is often released during fuel combustion, either from individual vehicles or at a large industrial sites like a power plant.

“We found that liver cancer patients living in areas with low PM2.5 tended to live longer than patients living in areas with high PM2.5, particularly for patients who were diagnosed at an early stage” said Dr. Eckel. For example, considering only patients diagnosed early, the median survival time was 2.16 years in the areas with lowest PM2.5 concentrations and 0.07 years in the areas with the highest PM2.5 concentrations. The results were similar after adjusting for potential confounders such as socioeconomic status or when limiting to just deaths from liver cancer.

The associations were strongest in the areas of highest pollution, indicating even minor improvements in air quality can improve health. As lead author Huiyu Deng said, “In places with high air pollution levels, even relatively small reductions could have a substantial health impact.” This could have major implications in other countries, where pollution levels are often much higher than in the United States.

What can you do to reduce your air pollution exposure? Dr. Eckel recommends monitoring your air quality index (airnow.gov) and taking the necessary precautions to protect yourself on poor air quality days, such as staying indoors or closing windows. She also recommends exercising away from busy roadways and setting the air control system in your car to “recirculate.” 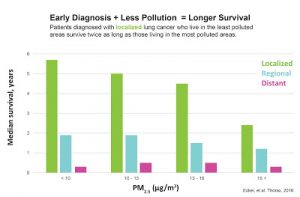