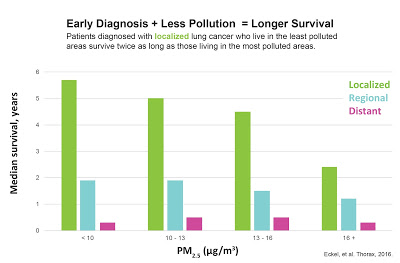 Exposure to air pollution has many impacts across the lifespan and has now been linked to survival of patients after being diagnosed with lung cancer. Lung cancer has been the most commonly diagnosed cancer over the past several decades. Patterns of lung cancer incidence and mortality have been closely tied to exposure to tobacco smoke across time and place. There is also a growing body of evidence that shows that air pollution exposures are associated with lung cancer incidence and mortality but, since survival times after lung cancer diagnosis can be quite short, few studies have attempted to disentangle the two. In addition, the International agency for Research on Cancer (IARC) recently classified ambient air pollution as carcinogenic. 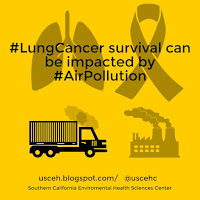 “We thought that if ambient air pollution is a carcinogen that can drive lung cancer development, then exposure to air pollution in patients already diagnosed with lung cancer could promote the progression of their disease through the same biological pathways.” said Sandrah Eckel, PhD, assistant professor of Preventive Medicine at the Keck School of Medicine and lead author of the research. Therefore, Dr. Eckel and colleagues at the Keck School of Medicine at the University of Southern California decided to more closely explore the question of whether lung cancer survival times might be affected by air pollution.

The research, published this month in Thorax, shows that the length of time that lung cancer patients live after diagnosis varies depending on their exposures to regional pollution. Researchers found that the median survival for people diagnosed with early stage lung cancers who lived in areas with high levels of regional pollution was approximately 3 years shorter than for people who lived in areas with lower levels of pollution. “We focused on California, since there are a wide range of air pollution levels here and one of the largest and longest running air quality monitoring networks and cancer registry system in the US,” said Eckel.

Dr. Eckel and her team of researchers looked at lung cancer data from over 350,000 patients in the California Cancer Registry who were diagnosed with lung cancer between 1988-2009. From the extensive and detailed dataset, the team assigned air pollution exposure levels based on the average exposure at the patient’s residence at diagnosis. The pollutants that were used included: nitrogen dioxide (NO2, ppb), ozone (O3, ppb), and particulate matter with diameter <10 μm (PM10, mg/m3) and 2.5 μm (PM2.5, mg/m3). “This study is unique in that it looks at another modifiable risk factor, besides smoking, that can impact lung cancer survival after diagnosis. The California Cancer Registry data provided a large, population-based sample of all lung cancer cases diagnosed in California over the last 20 years, minimizing the biases often encountered in other types of study designs,” said Dr. Eckel.

In general, the stage of cancer at diagnosis is a major determinant of survival, with patients diagnosed with earlier stage cancer living longer. As expected, the impacts of air pollution on survival were most evident in patients diagnosed at an early stage, when their cancer was localized to only their lungs. The median survival in patients with localized cancer at diagnosis living in areas with higher levels of fine particulate matter (PM2.5) was only 2.4 years as compared to 5.7 years in patients living in areas with lower levels of PM2.5. Patients whose cancer had spread to other parts of their bodies had shorter survival times overall and showed little difference in survival time whether they had high or low exposures to air pollution. These patterns of association persisted even after adjusting for numerous socio-demographic characteristics and type of cancer treatment.

The study’s findings are intriguing, but additional research is needed to determine the causality of the association between air pollution and lung cancer survival rates. Even so, these findings suggest that newly diagnosed lung cancer patients might want to consider taking precautions to reduce their own exposures to air pollution. As we continue to see increased emphasis on lung cancer screening, we will see more and more patients diagnosed with lung cancer at early stages and these are the patients that could potentially benefit the most from reduced air pollution exposures.

What can lung cancer patients with a locally diagnosed cancer do to take action that may effectively extend their survival times? Dr. Frank Gilliland, senior investigator on the study said, “In the short-term, common-sense precautions to reduce personal exposure to air pollution exposures include avoidance of places and times with high air pollution levels and using indoor home filtration systems. In the long-term, air quality standards should be evaluated to consider whether they are adequately protecting human health.” 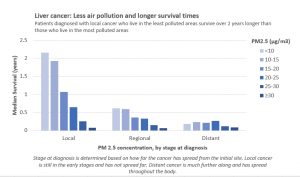