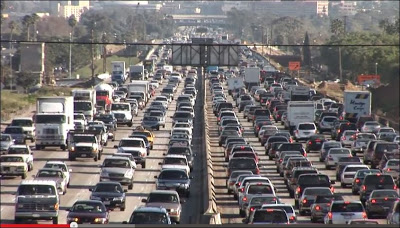 LOS ANGELES — Policymakers and developers planning high-density housing near public transit with the goal of reducing automobile use and greenhouse gas emissions that contribute to global warming need a clearer understanding of the health risks from air pollution that may be created if that housing is also built near busy roads and freeways, according to new research by Keck School of Medicine of the University of Southern California (USC) scientists.

The study is one of the first to focus on the burden of heart disease that can result from residential exposures near major roadways in a large urban area. According to the researchers, the effects of the near-roadway component of air pollution is generally underappreciated and not included in estimates of air pollution-related heart disease. These near-roadway exposures are largely unregulated.

“The health benefits of these reduced emissions are partially offset by increased exposure to high concentrations of near-roadway pollutants among a larger population living next to major traffic corridors,” said Rob McConnell, professor of preventive medicine, Keck School of Medicine of USC and corresponding author.

“The response to SB 375 is a historic opportunity to optimize the health co-benefits of policies to reduce greenhouse gas emissions. An appreciation of the health risks of near-roadway pollution would strengthen the argument for proposals to zone buffer areas between busy roadways and new high-density housing and to develop a zero-emission or near-zero-emission vehicle fleet.”

The investigators noted that the population is aging and that older persons are more vulnerable to the effects of pollution. Therefore, the number of heart attacks caused by air pollution is likely to increase over the next two decades even though pollution is decreasing.

Keck Medicine of USC is the University of Southern California's medical enterprise, one of only two university-based medical systems in the Los Angeles area. Encompassing academic, research and clinical excellence, the medical system attracts internationally renowned experts who teach and practice at the Keck School of Medicine of USC, the region’s first medical school; includes the renowned USC Norris Comprehensive Cancer Center, one of the first comprehensive cancer centers established by the National Institutes of Health (NIH) in the United States; has a medical faculty practice, the USC Care Medical Group; operates the Keck Medical Center of USC, which includes two acute care hospitals: 401-licensed bed Keck Hospital of USC and 60-licensed bed USC Norris Cancer Hospital; and owns USC Verdugo Hills Hospital, a 158-licensed bed community hospital. It also includes more than 40 outpatient facilities, some at affiliated hospitals, in Los Angeles, Orange, Kern, Tulare and Ventura counties.U.S. News & World Report ranked Keck Medical Center of USC among the Top 10 in ophthalmology and among the Top 25 hospitals in the United States for urology and cancer care.