NEW RESEARCH: Most effective air quality policies: a study of the past 20 years 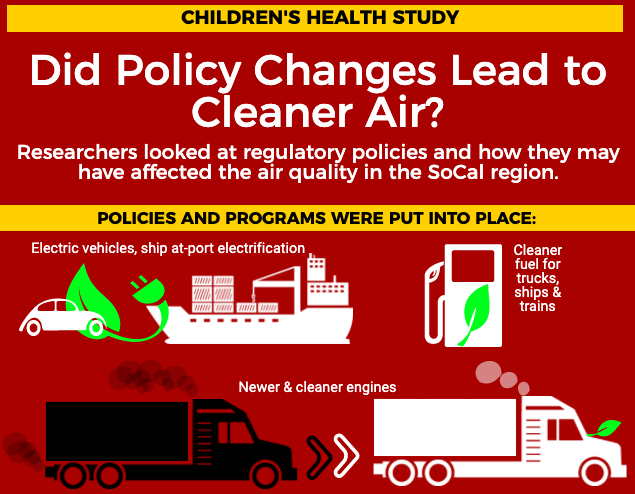 How much has air quality changed in the Southern California region over the past 20 years?  Are these changes related to specific policies to clean the air?  Do air control policies or regulations actually work?

Center investigators have been working to understand the long-term effects of air pollution on our health.  But as the air quality in our environment changes, how does that affect our health? To understand the health impacts of ongoing changes in the environment, it’s helpful to know what has changed in the air and why. 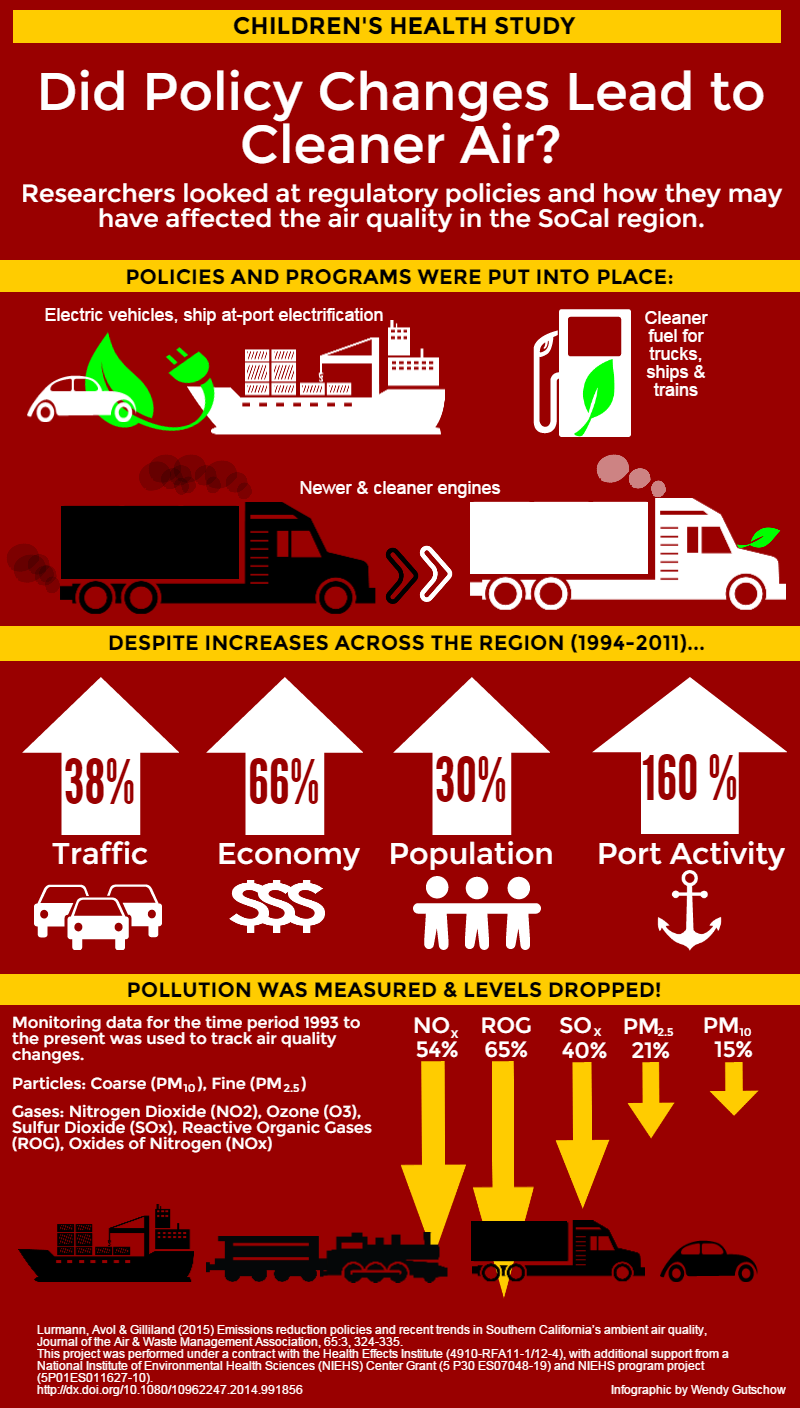 Recently, Center investigators reviewed the changes in air quality across southern California over the last 20 years. The findings of Ed Avol (USC Preventive Medicine), Frank Gilliland (USC Preventive Medicine) and Fred Lurmann (Sonoma Technology Inc, a long-time collaborator and contributor to much of our Center research) were the basis of a March 2015 publication in the Journal of the Air and Waste Management Association (JAWMA), entitled “Emissions reduction policies and recent trends in Southern California’s ambient air quality.”

As the JAWMA article details, there have been dramatic improvements in regional air quality across southern California over the past 20 years. Several key air pollutants, tracked by U.S. EPA, dramatically declined in outdoor concentrations between 1994 and 2011. Nitrogen dioxide (NO2), which is a by-product of engine combustion, decreased by 28% - 53% in communities from San Luis Obispo County to San Diego County. Inhalable particle matter (PM, microscopic pieces of dirt floating in the air, in specific size ranges, such as 2.5 microns, denoted as PM 2.5) decreased by 13% -54% across a similar range of communities and areas. Changes in ozone (O3) were less pronounced, improving by 12% - 27%, depending on the community.

Why did this happen, and what does it mean?

NO2 and PM2.5 are closely linked with “primary” emissions: that is, direct emissions from car and truck exhaust, power plants, industry, ocean-going ships, trains, and off-road construction equipment. As emissions from those sources have been reduced over the years, the air has become much cleaner. These improvements have come from the use of cleaner trucks at the Ports of Los Angeles and Long Beach and now through California, a mandated smog check program, requirements for cleaner fuels, requirements for cleaner engines on bus and truck fleets, and a push to get the oldest and dirtiest trucks off the road.

Ozone levels have been much more difficult to reduce, since ozone is not directly emitted by trucks or cars or power plants. Instead, it is a “secondary” pollutant, that is, it is formed in the daytime air by chemical reactions powered by sunlight and chemically enhanced by certain other pollutants in the air. Reducing these other pollutants slows down the production of ozone, but getting BIG reductions in this pollutant is much harder than for other pollutants.

What made these changes happen?

In southern California between the 1990s and today, regulators put hundreds of pollution policies and programs into place.  The most effective collective programs included efforts to reduce on-road emissions. This makes sense, given that there are over 13 million cars operating in Los Angeles County! Remarkably, these air quality improvements occurred even though traffic increased 38%, population increased 30% , economic activity increased 66% and activity in and around the ports increased 160%.

Why did these policies work in Southern California?

There are a huge number of vehicles on the road, plus a busy port with thousands of trucks.  This created a high baseline to start from, with emission reductions making a big difference collectively.  In addition, by the 1990s stationary sources were already well controlled. Sources such as power plants are under local jurisdiction, and agencies such as SCAQMD enforced regulations. In addition, Southern California has no coal burning power plants, which create large amounts of emissions.  These are factors that made the on-road vehicle regulations successful.

There are several important points to remember here. We still don’t have “clean air” on some days across Southern California, but there has been a lot of progress. These major policy actions by local, regional and state government agencies and the ports went beyond what was required from federal regulations.  The improvement in air quality is a real success story, but we need to keep up the effort so that more days are “clean” and our air quality meets the levels that science and regulators agree are necessary to protect our health. To see what effect this improvement has had on our health, check out the related research (Gauderman, et. al 2015, Berhane, et. al 2016) done by our investigators during this same period of time. 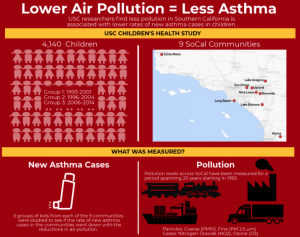